The newly released i.MX 8QXP introduces a new concept for manipulating resource allocation, power, clocking and IO configuration and muxing. Due to the architecture complexity of this new chip, a System Controller Unit (SCU) has been added to the system. The SCU is a Arm Cortex-M4 core and is the first processor to boot in the i.MX 8QXP design.

It is the responsability of the SCU to control:

All those subsystems are abstracted thanks to the System Controller Firmware (SCFW) running in the SCU. Other software components communicate with SCU via an Application Programming Interface (API).

This API makes Remote Procedure Calls (RPC) via an underlying Inter-Processor Communication (IPC) mechanism. Each OS distributed by NXP features a library that allows it to interact with the SCFW running on the SCU.

The SCU sub-system is made out of: 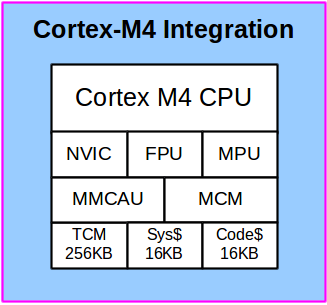 It includes the following set of peripherals:

In order to control all the functionality of the SCU, NXP has created the SCFW. The SCFW is distributed in a porting kit from.

NXP only releases packages in a majority object code form, however a board.c file is provided in which most of the configuration of the SCFW can be done.

The first main step from SCFW to configure the DDR and start all other cores in the system. The boot flow is described in the image below:

From this point SCFW takes over and loads any image to the Arm Cortex-M or Cortex-A cores.

Export the toolchain to compile SCFW:

The latest porting kit can be found here:

After the SCFW porting kit is downloaded and un-tar, navigate into packages and run the binary file inside:

Navigate inside the newly created “imx-scfw-porting-kit-0.7” and into “src”. Extract the desired SCFW porting kit.

The tar file extracted will be different depending on which board is being used.

All the code that is specific to a board configuration is under “platform/board/mx8qxp_mek/board.c”

All the files resulting from compilation can be found inside build_mx8qx/

The i.MX 8QXP MEK is the latest release from NXP’s i.MX 8 family. This is the most powerful i.MX to date and promises capabilities directed to the industrial...