This post covers the required steps to setup the MCUXpresso BSP and IAR toolchain to run and debug the Cortex-M4 on the i.MX 7ULP SoC. The IAR Embedded Workbench IDE needs to be installed in a Windows machine.

Note this software is not free and you need to pay attention on the limitations of the evaluation license.

The BSP for Cortex-M4 is called “SDK” (Software Development Kit) and it can be downloaded at MCUXpresso website.

The steps to download the SDK and middleware source codes are explained on the section “Downloading the SDK” in this post:

The previous link explains how to build the image using GCC in a Linux machine, so this method is not covered here.

After downloading the SDK, extract the zip file. The folder structure is shown below: The application examples are stored in the folder below:

At the time of the writing of this post, the SDK version is 2.4.0 and there are 9 demo examples on SDK. The example power_mode_switch and wireless_uart_bridge so far are the only ones capable to boot properly the Cortex-A7 core (Linux). To know if the application example provides the required PMIC (Power Management IC) commands to fully initialize the Cortex-A7 core, refer to demo’s readme.txt file. The section “Board Settings” inside the readme file details if the example is supported by the Linux BSP.

To open the project, double click the workspace file *.eww.

There are 2 ways for loading the code to the Cortex-M4, the first method is to load the code to the RAM (TCM RAM), the second is to program the external QuadSPI flash memory.

Loading the code to the RAM is faster for rapid debugging when several compile-debug interactions are needed, but it’s limited to 256kB for the code size, including stack.

To run the code from the RAM follow steps below: 2: Click on Linker category, browse for the linker file to compile for the RAM memory: 3: Click on Debugger category and select the JTAG probe model attached to the board: 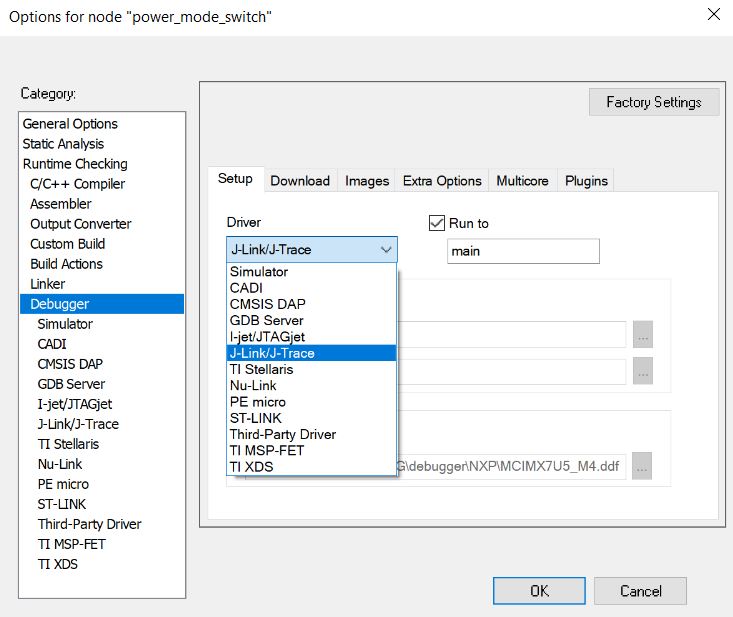 4: Click on the model of your debugger probe and at sub-category Setup, configure the parameters for the probe. For this particular example it’s being used the J-Link, so click on J-Link/J-trace: On Connection tab, make sure to select SWD instead of JTAG, as MCIMX7ULP-EVK uses SWD. On Breakpoints tab leave as below: Compiling and downloading the code to the RAM If the project doesn’t have the ARM core selected, just for the first time, select the Cortex-M4 as shown below: Code is then compiled, downloaded to the RAM and stops at the beginning of main() routine. By pressing the arrow GO (F5), the code is executed. To add Breakpoints, right click on the line from C code you want to break at and select Toggle Breakpoint (code)

If any power cycle occurs, the code is lost, as data in RAM is not retained.

Running the code from the QuadSPI external flash

Since the JTAG probe can’t communicate directly to the QuadSPI flash memory, the process to program this non volatile memory follows a different procedure. The binary needs to be copied to the MicroSD FAT Linux partition and then flash to QuadSPI memory using U-boot.

The instructions can also be viewed on the “Getting Started with MCUXpresso SDK for i.MX 7ULP.pdf”. The file can be found inside the <sdk dir>\EVK-MCIMX7ULP\docs folder. Refer to section: “6 Running an application from QSPI flash” for details.

In summary, the procedures are:

1: Similar as explained previously, go to Options -> Linker and select the flash linker file, as shown below: 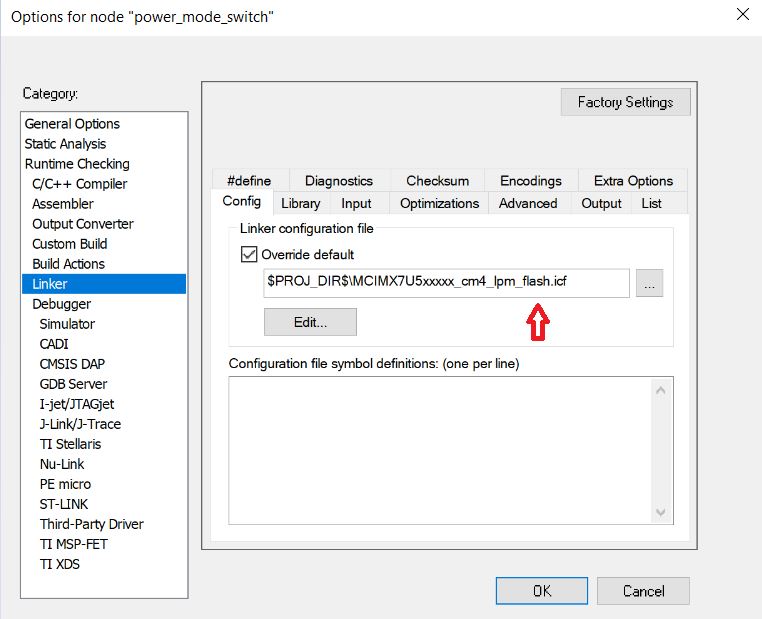 2: Click on Make (F7). After the code compiles, the sdk20-app.bin file is created in the folder:

This file needs to be converted to a specific format before downloading to QuadSPI memory and this is done by the imgutil script that comes with the SDK package located at:

The imgutil script must be executed using Bash on a native Linux machine or using Bash emulated in Windows.

In case you want to run this procedure in a Linux machine, refer to append of this post.

1: Copy the binary file sdk20-app.bin generated by IAR to the folder <sdk dir>\EVK-MCIMX7ULP\tools\imgutil\evkmcimx7ulp

2: Using the Ubuntu Bash, navigate to the board folder:

4: Copy the sdk20-app.img file to the MicroSD card containing the Embedded Linux image. The file needs to be copied to the FAT partition Boot root folder (where zImage resides).

5: Remove the MicroSD from the computer.

Insert the MicroSD into the MCIMX7ULP-EVK board and connect the USB cable to the Debug USB connector. 2 virtual COM ports should be mounted. One for the Cortex-A7 and other for the Cortex-M4. Both COM ports must be configured @115200 8N1 baud.

On the COM prompt for Cortex-A7 (Linux) press any key within 3 seconds after power up to stop auto boot and enable the U-boot prompt. In this step you should have this screen: Execute below 4 commands to download the *.img file from MicroSD card to the QuadSPI memory:

Done, you have completed the QuadSPI programming.

Now you can power cycle the board and the 2 cores send data to its respective COM port. The M4 loads the application Power Mode Switch Task, and Cortex-A7 loads the Linux, like below:

If the Cores can’t communicate to console, remember to disconnect the JTAG flat cable, or press RUN on the IAR IDE.

Running and Debugging the code from QuadSPI

Attach the J-Link probe to the board, power on and press the IAR button Debug without Downloading. The code from QuadSPI is executed and stops at main() routine. Note that if the “standard” Download and Debug (Ctrl+D) button is pressed instead, it will also work, but warnings will be shown informing the flash could not be programmed. This is caused by the IAR flashloader not being able to program the QuadSPI memory.

If a new software version needs to be loaded to the Cortex-M4 QuadSPI memory, all the procedures to compile, convert the binary file and flash using U-boot must be executed again.

To convert the sdk20-app.bin to sdk20-app.img using a Linux machine, follow these steps:

1: In Windows, copy the folder imgutil <sdk dir>\EVK-MCIMX7ULP\tools\imgutil to a memory stick:

3: Attach the memory stick to a Linux Machine

4: Copy the folder imgutil to your Linux PC.

4.1: Navigate to the evkmcimx7ulp folder and execute the mkimg.sh script:

By executing this script, the file sdk20-app.img is generated. In case issues occur, verify the files permissions, If needed, give full permissions to all imgutil folder by executing $ chmod 777 -R imgutil.

5: Copy the sdk20-app.img file to the MicroSD card containing the Embedded Linux image. The file needs to be copied to the FAT partition Boot root folder (where zImage resides).

6: Remove the MicroSD from the computer. Go to section Flashing the QuadSPI Memory.